The research work is geared to extracting suitable parameters from the human walk. This way, flooring materials may be tested regarding their slip resistance and the perception of human beings as to when a floor is "slippery" can be understood.

The most important findings from BAuA's research projects are summarised in the special script S 84 "Beurteilung der Rutschsicherheit von Fußböden" (assessment of the slip resistance of floors).
The central result is the existence of two different types of walk. They differ significantly regarding the horizontal contact velocity of the foot in the phase of making contact with the floor that is important for the process of slipping.

These determined contact velocities, as well as the possible different walking velocities of human beings (walking, jogging) are important criteria that must be taken into consideration when developing test methods for the slip resistance of flooring materials.

In order to classify flooring materials regarding their anti-slip properties, there is a standardised laboratory test method: the walking method "Ramp test" pursuant to DIN 51130 and ASR A1.5/1,2, respectively.
Different mobile measurement methods are being used for testing the slip resistance on site, with the methods being differentiated by their measuring velocity:

As a result of the walking method "Ramp test", a slip resistance value R is determined and a classification to an R class is performed. Regarding the materials to be laid, the ASR A1.5/1,2 specifies certain R classes depending on the field of application. Mobile measurement methods measure the friction coefficient directly or indirectly. However, it is not possible to use the measured friction coefficient to directly deduce the R class. The other way around does not work either.

The following assessment is applicable to friction coefficients determined with a low measuring velocity (e.g. with GMG 200):

As indicated above, the walking method on the inclined plane pursuant to DIN 51130 and DIN 51097 (for barefoot areas) is a method that has been tried and tested for years.
The test is performed in the meaning of a type approval test. The test results are taken into consideration when selecting and designing flooring materials on the basis of activity-related requirements regarding the slip resistance of flooring materials in working spaces and areas with a risk of slipping (ASR A1.5/1,2).

The basic principle of the test: When walking downwards along the inclined plane, it is important to find the angle of inclination where the subject becomes insecure and starts slipping. For this, the angle of inclination of the underground covered with the flooring material to be tested is increased in small steps until reaching the insecure condition while the subject "walks stationary". This is increased successively until the subject slips. When this has happened, the so-called angle of acceptance α (physically friction angle ρ) is defined. This is the angle where the subject starts to slip, i.e. where the static friction necessary for walking in a safe manner transitions into the dynamic friction. The angle of acceptance α is a measure for the slip resistance of the floor.

The angle of acceptance must be captured as closely as possible near the static friction. This value must be limited as far as possible in a small adjustment range. This is performed by approximating too large and too small an angle of inclination.

The test is performed using a defined test shoe in a dry condition or using test oil (water for the barefoot area) as lubricant. Subjective influences regarding the angle of acceptance are limited by a calibration method. The entire range of the angle of inclination is divided into certain angle ranges. From these angle ranges, the tested flooring material is classified to certain assessment groups of slip hazard (R groups).

This test is particularly suitable, since the human walk is taken into consideration. However, it is only performed in the laboratory and not on site and is mainly used for assessing and classifying new flooring materials. The predominant atypical test using oil instead of water, which is the most frequently present lubricant for slipping accidents, is disadvantageous.
Assignment of the angles of acceptance to the assessment groups for slip resistance pursuant to ASR A1.5/1,2.

The following image shows the experimental set-up of the ramp test in the laboratory: 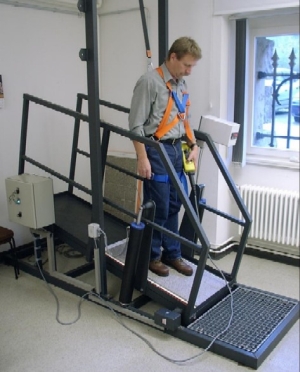 All known gauges are based on the following principle: one or several sliders are pulled over the horizontal flooring material at a low velocity manually or by a machine. The friction force generated in so doing is measured and the ratio of friction to pressing force is used to determine the friction coefficient µ.

The first gauges were pulled manually and the friction force was read from a pointer instrument. One of the first motorised gauges is the tribometer FSC 2000 Print and Digital. However, it stopped being compliant with the rules in August 2008. 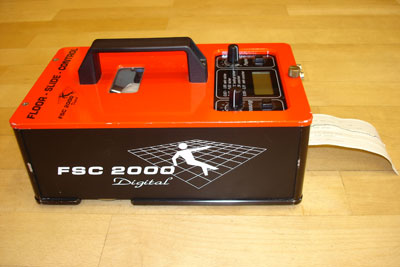 This device has an integrated drive maintaining the measuring speed at a constant 0.2 m/s. The measured result is recorded on a paper strip; a friction coefficient can be read from this through manual averaging.

The disadvantages of this device include:

This commonly used device and its previous versions do not meet the requirements of DIN 51131. This is because they only have one slider and not the required several sliders. A revised device that complies with the rules according to the manufacturer is being prepared.

The requirements of DIN 51131 are currently only met by the sliding gauge GMG 200 and 100, respectively. When compared to the previous version GMG 100, the pulling rope contained there was replaced by a stable and safely working strap.

This device is equipped with

As a measured result, the friction coefficient is obtained directly as an average value of the measurements. Furthermore, the device checks whether the required length of the measurement distance was achieved. An interface can be used to directly transfer the measured values to computers and to analyse these on them.