Recommendations for design and use

As opposed to purely architectural or safety-related representations, we focus on user-friendly, motion-optimised stairways. 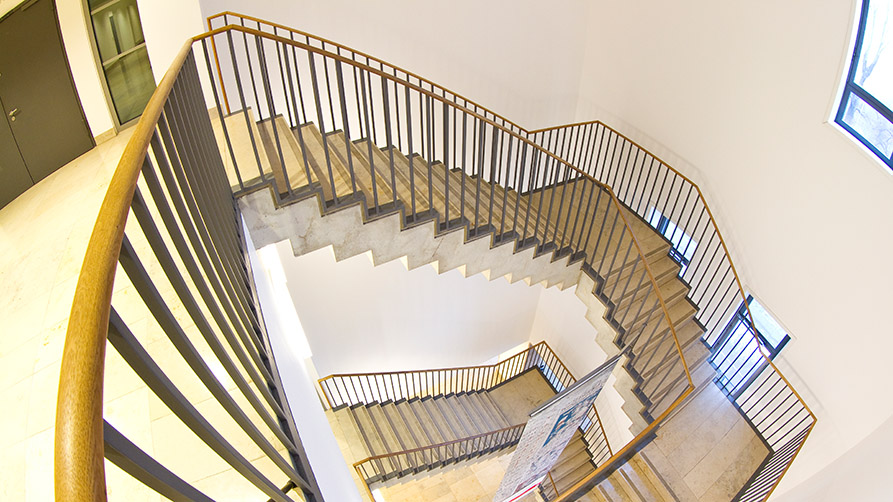 Many accidents occur on stairways, both at work and at home or in the spare time.

What are the reasons?

If an accident on a stairway happened, the traditional inspection of the stairway often does not provide any indication regarding the cause of the accident. Within the framework of a detailed study of the occupational insurance association for the retail industry, this applied to 82 percent of the stairways accidents had occurred on. The steps were not dirty, they did not have any damaged spots, and the design and construction provisions had been met. If no technical flaws are apparent, the first conclusion often is that the cause of the accident has to be the user himself/herself. "Carelessness", "clumsiness", "lack of concentration" are then part of the verdict.

"Clean and intact" does not mean "safe"

Of course, misbehaviour of users also contributes to the course of events leading to accidents on stairways. However: where a stairway is considered intact from a technical point of view, severe design flaws may nevertheless be hidden. For example, structural parameters, such as dimensioning of steps and landings or the condition of tread surfaces or tread edges may be incorrect. Likewise, so-called perception conditions (for example illumination, colour, labelling) may be adapted poorly to the motion control of human beings.

Allow for an undisturbed rhythm of motion!

Climbing stairways is a motion learnt in childhood. A coordinated rhythm of motion is created that is adjusted to the initially mentioned stairway parameters. The automated sequence means less psychic stress for the person climbing the stairs.
However, this is different if

If one of these items applies, or even several of them, insecurities and falls will be the result - despite clean, intact treads.
Thus, the following is applicable: the undisturbed rhythm of motion requires a match between human beings' motion program and the conditions provided by the stairway.

The Design of safe Stairs

Find out more : The Design of safe Stairs …