A safety-related analysis of damage events in Germany

BAuA systematically investigates accidents in industrial plants. Why are we doing that? Because you can learn from accidents! In so doing, we aim at generating knowledge as to how the safety of systems and employees can be improved.

In order to use events (damage events) in process systems in order to be able to draw lessons against any repetition of these events and regarding the orientation of the failure-preventing and failure-limiting measures, respectively, data is analysed according to industrial health and safety criteria. Reports on reportable events pursuant to the Major Accidents Ordinance, reports on fatal industrial accidents, datasets on non-reportable events provided by the Committee "Ereignisauswertung" (event analysis) of the Commission on Process Safety (AS-Er of the KAS, successor of the sub-committee "Ereignisauswertung" (event analysis) of the Major Accidents Commission) and information from technical literature are present. For efficient data collection and analysis, a database was created that is described in the research report Fb 1022. Building upon this collection and analysis, the data is processed continuously, which will be described in the following for the years of 2004-2006.

An overview of the damage events

Since 1 January 2004, 136 new datasets were entered into the database. Thereof, only 91 events actually occurred after this date, however. This shows that a significant number of events are entered in a delayed manner. In this, the data was collected from the following sources: 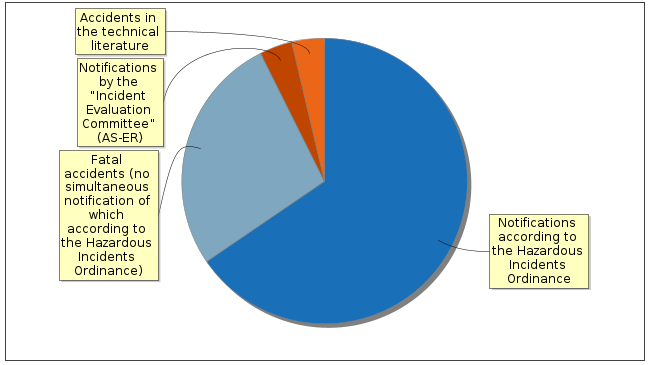 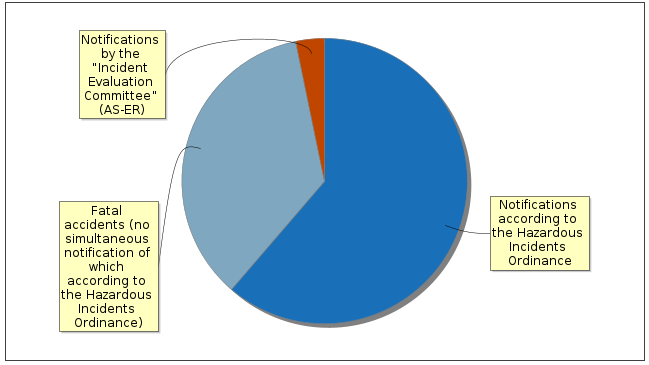 Among these 91 events, there were 20 accidents with lethal consequence and 21 accidents where people were injured.
A more profound analysis shows that a substance was released without any fire and explosion in most events: 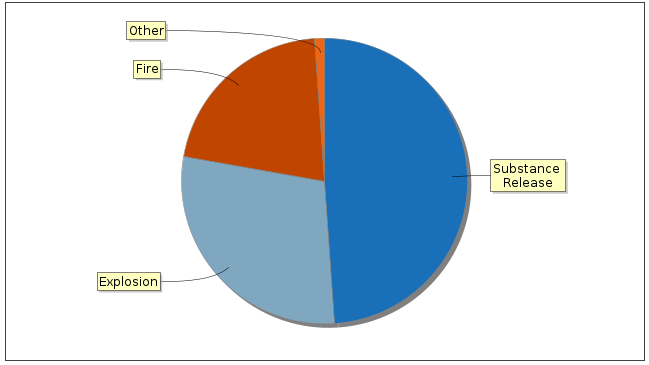 As in the previous years, the majority of the damage events occurred for the system type "Chemical products, pharmaceuticals, mineral oil refining" (42 datasets). In contrast, only eight datasets regarding the system type "Management and elimination of waste and other substances" could be entered as events reportable pursuant to the Major Accidents Ordinance. However, at least 30 events in recycling and waste management companies were published as press releases on the Internet for 2005 and 2006 alone (source: Federal Environment Agency). This shows that only a low number of actual damage events in recycling and waste management companies is captured via the reporting obligation according to the Major Accidents Ordinance.

In contrary to the previous years, it was possible to capture about 30 datasets on incidents in connection with vessels. These datasets specifically provided findings regarding hazards caused by foreign substances, deposits, substance intolerances, static charging, and poor preparation of the vessel regarding repair and cleaning work, respectively. The analysis of the data for hazardous substances causally or decisively involved in the events did not show any significant accumulation regarding specific substances. In at least seven events since 2004, a corrosion resulted in a loss of function of safety-relevant facilities.

New findings from accident analyses are incorporated in the technical rules

Due to the events entered retrospectively, it was possible to perform an analysis of the findings regarding the technical provisions and rules concerned. This way, it was possible to identify 128 events and 25 events having occurred since 2004 from all entries in the database that provided indications to the creation of new texts on technical rules and the application of existing rule texts in practice. Below, there are some examples in this regard:

Violation of rules and provisions is the primary cause of accidents

When reading the first chapters, it becomes apparent that the number of newly entered data and the number of events thereof that actually occurred since 2004 is far too low in order to make a statistical statement. However, every single event may provide valuable information regarding hazards assessed incorrectly up to now and regarding the design of protective measures. In this regard, these events shall continue to serve as an important source of information when developing rules and when designing technical and organisational protective measures.