Welding is the most frequently used technique for the thermal joining of two metals in industry. The development of welding technology is still constantly progressing; refined process variants emerge, and modern hybrid methods are used in everyday operations.

In a report commissioned by the German Welding Society (Deutscher Verband für Schweißen, DVS) in 2013 entitled "Macroeconomic and sectoral value added by the production and application of joining technology in Germany and Europe", the number of welders in Germany was estimated at about 260,000 in 2011. In Europe, this number is close to one million.

The national implementation of the EU Directive 2006/25/EC by the OStrV defines mandatory exposure limit values for workplaces exposed to optical radiation; their compliance with which must be checked in the course of risk assessment, especially of welding workplaces. 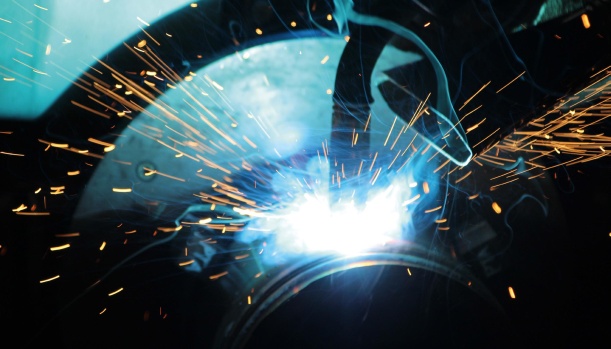 Considering the current state of the art, performing a risk assessment is often difficult, and conducting the necessary measurements may require a considerable effort. The emission of optical radiation from the arc can differ distinctly for various welding techniques: in a mere fraction of a second, the emission from shielded metal arc welding can be very intense and exceed the UV exposure limit value; but it can also be significantly lower, for example, during oxy-fuel welding, where the UV exposure limit value for an 8-hour working day can be complied with. Moreover, the emitted radiation can vary over time (intermittent).

In addition to protecting the welder, for whom a safe application of welding techniques can usually only be ensured when undertaking personal safety measures, other employees who might be in the vicinity of welding workplaces are also to be protected. These include, among others, crane operators, forklift operators, employees on traffic routes or at nearby workplaces, because intensive optical radiation can still be hazardous at relatively long distances.

The overall objective of BAuA's three-part research project - carried out in the period between 2015 and 2018 - was to improve the protection of employees against hazards posed by optical radiation at and in the vicinity of welding workplaces.

Determination of emission and exposure

The optical radiation emission of the most frequently used welding techniques in factories, including carbon dioxide welding and fibre laser welding, was recorded extensively under common process parameters. The focus of the studies was on the variation of the welding current. As a result of this first project, mathematical emission models have been developed. In order to make these models easier to handle for operational practice, the "Pocket Disc for Arc Welding" was created. After adjusting the welding technique as well as the welding current, the time until exceeding the UV exposure limit at a distance of 1 m (welding assistant) and 3 m (factory traffic route) can be read with this practical guide. 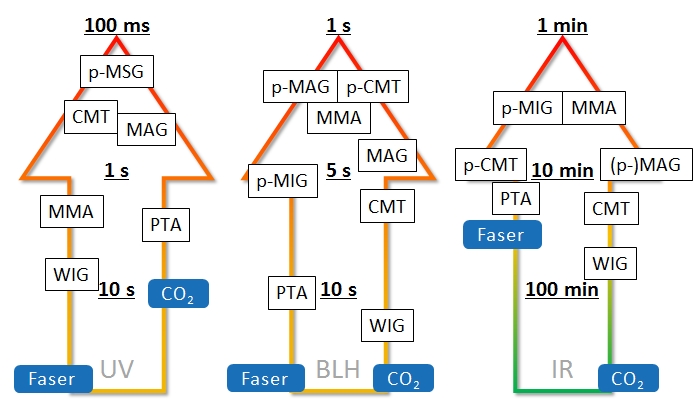 Since the optical radiation emitted by the welding arc is strongly intermittent (varies over time), the question arises how to assess this incoherent radiation with regard to the hazards to employees. At the moment, regulations concerning laser radiation are used for this purpose; however, their transferability has not been scientifically examined. Within the second subproject, this problem was addressed and confirmed by a scientific report. Preliminary experimental tests on biological material showed that the disinfection rate of pulsed optical radiation is around 30% higher than its cw (continuous wave) analogue. In vitro UV irradiations of skin samples, however, showed no significant differences between the two types of radiation with regard to damage induction and repair capacity. Yet, the induction of apoptosis was highly dependent on various radiation parameters, including pulse duration and pulse repetition frequency.

Fig.: Illustration of the Rule of Reciprocity of Photobiology (Bunsen-Roscoe Law)

The focus of the third subproject was on the investigation of the transmission and reflective properties of protective components at and near welding workplaces with regard to their effectiveness. In the context of this investigation, surfaces (wall coatings, floorings, working materials, etc.) that can lead to a significantly higher exposure at welding workplaces were identified.

The investigation of transmission properties of protective clothing for welders showed a strong dependence on the grammage of the fabric. However, with few exceptions, the fabrics of the sample under investigation can be considered to be UV-opaque and thus meet the requirements of textile UV protection. Based on the Ultraviolet Protection Factor (UPF), a modified version called welding UPF (wUPF) was developed to allow an assessment of the protective properties of such clothing against artificial UV radiation. 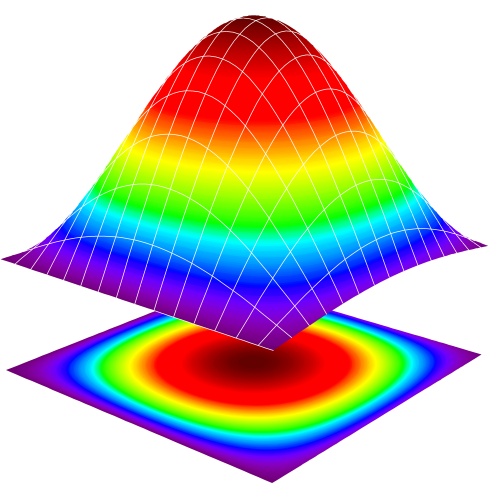 Reflectance and transmittance of artificial optical radiation at welding workplaces

Find out more : Reflectance and transmittance of artificial optical radiation at welding workplaces …

Legal provisions regarding the protection against risks arising from optical radiation

Find out more : Legal Provisions regarding the Protection against Risks arising from Optical Radiation …

DVS: Macroeconomic and sectoral value added by the production and application of joining technology in Germany (PDF, 900 KB)