The advancing technological development causes an increase in the diversity of optical radiation sources. It covers the range from filament and gas discharge lamps via (organic) LEDs through to laser radiation.

The following examples convey an impression of the diversity of physical mechanisms for some optical radiation sources. However, they are by no means exhaustive. 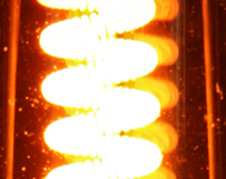 If a sufficiently high electrical current is conducted through a metal filament (e.g. made of tungsten), it starts to glow. The visible and infrared radiation emitted in so doing originates from the relaxation of thermally excited electrons. However, since the filament mainly only heats, the efficiency of a filament lamp is relatively low. Hence, it is replaced increasingly by new technologies, for example by the light-emitting diode.

In a tube filled with a pure gas or a gas mixture there are two electrodes. In between them, a voltage is applied. Due to the difference of electronic potential, the electrons move from the cathode to the anode and a part of the kinetic electron energy is transferred to the gas atoms by collision ionisation.

A (partial) plasma is created during this process. The electron excitation with subsequent return to the initial state is accompanied by emission of optical radiation. The gas filled in and its pressure are important for the radiation emission and define wavelength and intensity, for example. Neon lamps, Xenon gas discharge lamps, or fluorescent tubes are based on this physical principle. The welding arc also belongs to the class of gas discharge radiation sources.

The radiation emission of an LED is based on electrical recombination in doped semiconductor layers. By controlled placing (doping) of foreign atoms in semiconductor materials, a positive and a negative charge excess (p- and n-semiconductors, respectively) can be created. 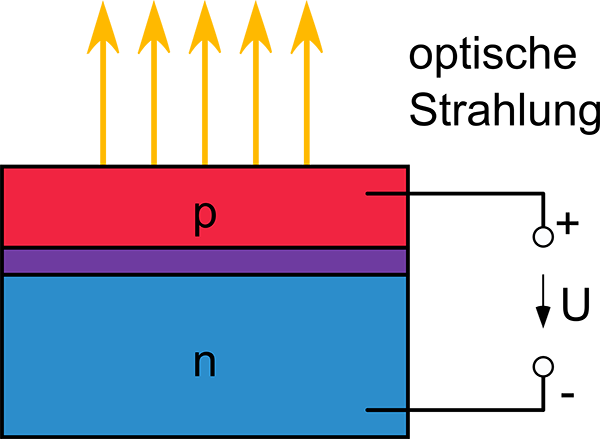 Schematic design of an LED, © BAuA

Then, applying a voltage causes a recombination of positive and negative charge carriers in the pn transition layer. There, the released energy dissipates as radiation. This process allows wavelengths ranging from the ultraviolet and visible to the infrared spectral region. Detailed information can be found BAuA's research report "Photobiologische Sicherheit von Licht emittierenden Dioden (LED)" (Photobiological safety of light-emitting diodes (LEDs))..

In a laser (abbr. for Light Amplification by Stimulated Emission of Radiation), a so-called active medium is stimulated to an excited state by a supply of external energy. Gases, liquids, as well as solids may be used as active mediums. The excitation energy (pump energy) usually is provided by electricity or radiation energy.

Mode of operation of a laser, © BAuA

By returning from the excited to the initial state, the energy previously supplied externally is dissipated as radiation. These photons themselves are able to "create" additional photons with equal frequency and phase. This process of stimulated emission is usually performed in an optical resonator increasing the intensity of the radiation more and more. Additional information can be found in the TROS Laserstrahlung (Technical Rules for artificial optical Radiation), for example.