Optical radiation may damage the skin and eyes of employees

The effect of optical radiation is limited to the skin and the eyes. The penetration depth depends on the wavelength. While short-wavelength UV radiation and long-wavelength IR radiation are absorbed on the surface, radiation in the visible and near IR spectral ranges penetrates more deeply. In addition to the wavelength, the type and severity of the damage caused by optical radiation may also depend on the intensity, the irradiation time, the irradiated surface as well as the optical characteristics of the tissue, and first and foremost on its absorption capability.

The dependency of the absorption on the wavelength is related to the differing optical characteristics of the tissue components. Normally, biological tissue contains significant amount of water, largely absorbing the optical radiation in the far IR range (IR-B and IR-C). In the UV, visible, and near IR ranges (IR-A), the absorption is facilitated by the biological molecules melanin and haemoglobin.

In the case of relatively long irradiation times in the range of minutes, as well as low radiation intensities (< 50 mW/cm²), photochemical effects may predominantly be triggered in the tissue. Here, the energy of the incident optical radiation is converted to chemical reaction energy. These effects can be seen to dominate in the UV and short-wavelength visible spectral ranges. In this respect, certain biological molecules absorb the incident optical radiation, are thereby stimulated, and transfer their energy to oxygen molecules. This creates a highly reactive form of oxygen (singlet oxygen). This oxygen attacks the surrounding tissue and creates free radicals that are also highly reactive and can damage the surrounding cellular molecules, such as proteins or the genetic material deoxyribonucleic acid (DNA). Optical radiation in the short-wavelength UV spectral range also has sufficient photon energy to cause direct damage to the DNA by splitting chemical bonds and linking DNA components differently. Damaging the DNA in this way can cause cancer.

Some chemical compounds and drugs may sensitise the biological tissue for the photochemical effect of optical radiation. This may cause severe biological reactions which are known as "phototoxic" reactions.

Thermal effects can be observed for irradiation times of between a couple of seconds and a few milliseconds and irradiation intensities of above 100 W/cm². These dominate in the long-wavelength part of the visible spectrum and in the IR spectral range. Here, enhanced vibrations of the tissue molecules lead to the heating of the tissue and the generated heat is transferred to the surrounding tissue. Damage can also occur due to the local increase in temperature.

There is a principal difference between thermal and photochemical effects. If, in the case of the thermal effect, the temperature of the tissue remains below a threshold - even for a longer lasting absorption of photons -, no damage is to be expected. On the other hand, in the case of the photochemical effect, the absorption of just one photon may cause damage at a molecular level. These changes are cumulative.

With a further increased irradiation intensity of up to 1 GW/cm² and a shortening of the pulse duration to microseconds or nanoseconds, the tissue "evaporates", i.e. it is explosively removed (photoablation). If the pulse duration is shortened further to values in the nanoseconds to picoseconds range and the irradiation intensities are simultaneously increased to 1 TW/cm², plasma (i.e. unbound electrons, ions, neutral atoms and molecules) is created. This process is accompanied by an acoustic shockwave that propagates and mechanically destroys the tissue. This is referred to as "photodisruption".

Hazards for the eyes

The eye is the most vulnerable organ when dealing with optical radiation. The cornea is only protected from the elements by a layer of tear fluid just a few micrometres thick. The anterior eye chamber, which is filled with aqueous humour, is connected to the cornea. In front of the eye lens is the circular iris. The aperture of the iris is called the pupil. The pupil's diameter changes depending on the levels of brightness, and thus determines how much visible optical radiation can enter the eye. Between the lens and the retina is the vitreous humour, which has a gel-like structure and consists of approx. 98 % water and a network of collagen fibres. 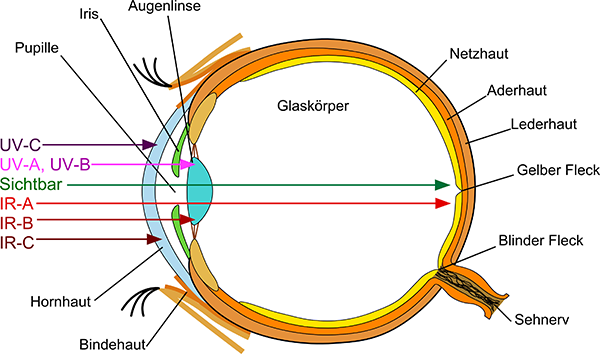 In the retina, where the photoreceptors are located, the light stimuli are processed into signals which are transmitted to the brain through the optic nerve. At the junction of the optic nerve and the blood vessels into the retina there are neither cones nor rods, so no vision there is possible. This is therefore referred to as the "blind spot". The macula is the area of the retina with the highest density of photoreceptors. It is located in the centre of the retina. The fovea is the central component of the macula; it is the spot of the sharpest vision. Behind the photoreceptor layer are the retinal pigment epithelium and the choroid, supplying the retina with blood and resting on the sclera. The optical radiation energy is largely absorbed by melanin in a very thin layer of the retinal pigment epithelium.

The eyesight is limited to the visible spectral range, i.e. this radiation penetrates the cornea, the eye lens and the vitreous humour, is projected onto the retina, and may in certain circumstances cause damage to the retina. Such damage is particularly severe and can lead to the considerable impairment of the eyesight. Minor damage to the retina usually remains unnoticed, as far as it is outside of the spot of the sharpest vision. Larger areas of damage, however, can lead to failures in the field of vision. In the case of damage at the area of sharpest vision, the sharp and colour vision can be reduced significantly. If the blind spot is affected, complete blindness may be the result.

Regarding potential retina damage, particular consideration must be given to the fact that optical radiation in the IR-A spectral range up to 1400 nm is also focused on the retina. Although it cannot be perceived, since the retina has no photoreceptors for these wavelengths, it can nonetheless cause damage there. Damage to the retina is irreversible.

Thermal damage to the retina occurs whenever a temperature increase of 10°C - 20°C is reached in the retinal pigment epithelium due to the absorbed optical radiation. This mechanism is dominant at short irradiation times (less than 10 s) and the retinal damage is normally perceived immediately. Thermal retina damage is largely caused by laser radiation.

In the UV and IR spectral range, optical radiation is increasingly absorbed by water in the front eye media and, as a consequence, cannot damage the retina. Since UV radiation and radiation in the far IR range are absorbed by the cornea, the conjunctiva and the lens, these parts of the eye are at considered to be risk. UV radiation can trigger photochemical reactions that result in very painful inflammations of the cornea (photo-keratitis) and/or the conjunctiva (photo-conjunctivitis). In such cases, the outer cells of the cornea and the conjunctiva are damaged. The damage becomes apparent four to twelve hours after exposure due to severe eye pain. Since the epithelium of the cornea and conjunctiva is in a continuous state of renewal with new cells consistently forming, this damage is reversible. Healing normally occurs within a few days. This damage may occur, for example, during electronic welding, if no eye protection is worn.

In the long-term, repeated exposure to UV radiation with intensities below those leading to the acute inflammation of the cornea and conjunctiva, can induce an opacification of the lens (cataract). Photochemical reactions change certain proteins in the lens cells, resulting in their pigmentation. Since no new cells are formed in the eye lens, this damage is irreversible. The effect of this process accumulates over an extended period of time, usually decades.

Long-term exposure to IR radiation can also cause an opacification of the lens, which is formed by condensation of the lens proteins into protein aggregates. As the lens temperature at which thermal cataract may occur, values of between 40° C and 45° C are given. This damage is also irreversible and may result in a complete loss of sight. Nowadays, however, a clouded ocular lens can be surgically replaced by an artificial lens. An example of activities in which a lens opacification may occur after several years of exposure to IR radiation includes the work of glass blowers at glass melting furnaces. In the IR spectral range above a wavelength of about 2500 nm, only the cornea is affected.

Ultimately, glare must also be mentioned as one of the possible adverse effects of optical radiation. Although it is not related to any direct damage to the eye, it may adversely affect the vision and thus lead to accidents when performing safety-relevant activities, such as driving or working on machines.

Hazards to the skin

The skin is pigmented by melanin, and an essential component of the skin tissue is water. Regarding the skin, the penetration depth of the optical radiation depends on the wavelength as well. Accordingly, the various layers of skin are affected differently. A large part of the optical radiation in the UV spectral range is absorbed by the epidermis. The radiation in the long-wavelength UV-A spectral range penetrates significantly more deeply. Long-wavelength IR radiation is also absorbed in the epidermis. 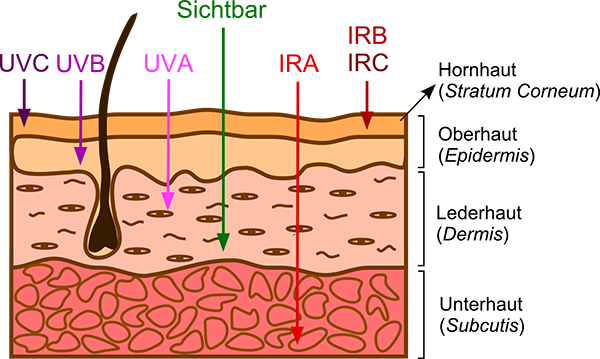 Chronic UV exposure can lead to the premature ageing of the skin, which is characterised by a wrinkled "leather type" skin. This is largely attributable to radiation in the UV-A spectral range. Exposure in the UV-A spectral range can furthermore trigger an immediate, albeit temporary change in the skin pigmentation (immediate pigmentation). The principal effect of optical radiation in the UV-B spectral range is the formation of erythema. As a result of erythema, a delayed pigmentation of the skin occurs. UV-C radiation is absorbed by all the biological tissues so strongly, however, that the radiation is only able to penetrate a thin upper layer. UV-B radiation can also induce mutations of the tumour suppressor gen p53, which can lead to skin cancer. Skin cancer is the most severe long-term consequence of strong exposure to UV.

Intensive radiation in the visible spectral range can cause the skin to become hot and induce photosensitive reactions. The exposure of the skin to intensive IR radiation can cause burning to the skin. During the long-term irradiation of the skin, both the conduction and dissipation of heat through the blood can be seen to play a role. Due to the circulation of blood and the associated dissipation of heat, the increase in temperature of the tissue is limited.