The changeover in the labelling of hazardous substances and mixtures to fulfil the requirements of the CLP Regulation has resulted in a variety of new classification elements. Find out here which elements are now available and what they look like. The labelling elements required by the CLP Regulation include:

For certain substances and mixtures, specific information is also included on the label:

Hazard pictograms inform strikingly about the dangers, which a hazardous substance or mixture may pose to our health and environment.

The hazard pictograms have the form of a red diamond with a black symbol on a white background, and replace the no longer valid orange rectangular symbols. While most of the hazard pictograms are closely related to the previous hazard symbols, the pictograms, which show a gas bottle, an exclamation mark and a torso, are new elements in hazard communication. Since the old EU directives expired, the St. Andrew's cross used until then, no longer has any function. The hazard descriptions previously assigned to the orange-coloured hazard symbols such as "toxic", "corrosive", and "highly flammable" have also been omitted.

The "torso" pictogram (GHS08, Health Hazard) deserves particular attention.  Combined with the signal word "danger", it signalises that very serious damage to health is possible, which is characterised by its delayed impact. In addition to the hazard pictograms, a signal word provides an additional, easily understandable indication on the extent of the possible hazard posed by a substance or a mixture. A distinction is made between the following two signal words:

Only one of the two signal words appears on the label, if required.

On 1st June 2015, the Hazard statements (H phrases) and precautionary statements (P phrases) replaced the old R and S phrases from the former, and no longer valid, 67/548/EEC Directive. The wording of the H and R phrases and the P and S phrases is very similar.

The numbering has the following structure:

The CLP Regulation stipulates a total of 29 hazard classes for the description of the different hazards. The old system, by contrast, only used nine categories of danger. Hence, the number of elements for the communication of dangers on the label has increased distinctly.

To prevent the label from being overloaded with data, Article 28 (3) of the CLP Regulation states, that the number of precautionary statements should be limited to six, if possible. There is no comparable arrangement for the hazard statements.

According to Article 32 (1) of the CLP Regulation, the hazard pictograms, signal words, hazard information and safety information have to be placed together as a unit on the label.

In addition to the H and P-statements, there are also the "EUH statements", which are additional labelling elements of the CLP Regulation, which have no equivalent in the UN-GHS. They were previously used in the scope of the former EU regulations, and they continue to be required in the European Union when necessary.

Further help and explanations about the CLP Regulation are available via the links provided on this page. You can also order information material, such as the GHS memo card "Hazardous substances compact", which addresses the meaning of the new pictograms, as well as posters on the Globally Harmonised System (GHS) in the EU. 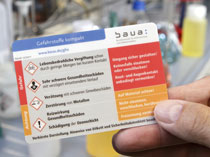 Hazard pictograms and further elements on the label

A compact overview of the hazard statements

Find out more : Hazard statements for Hazardous Substances and Mixtures …

Standardised safety advice for the label

Find out more : Precautionary Statements for Hazardous Substances and Mixtures …

Example of a label for a Mixture

Find out more : Example of a label for a Mixture …

The new pictograms are in the shape of a red diamond with a white background, and will replace the old orange square symbols.

Globally Harmonized System of Classification and Labelling of Chemicals (GHS)

More about Classification and Labelling