System for fast pan-European exchange of information about dangerous products

The RAPEX system informs about measures taken to prevent or limit the use of dangerous products. These may be, for example, withdrawal or recall actions. RAPEX covers both the measures of the market surveillance authorities of EU Member States and the voluntary measures taken by manufacturers and distributors.

Every Friday, the European Commission publishes an overview of dangerous products reported to it by the Member States. Here you can obtain consumer information of whether or not you are dealing with a dangerous product. The same applies if you want to sell or import products as a distributor. Many companies are now using the RAPEX overview in order to get informed about potential product risks, for example, because they are currently looking to create a risk assessment for their own product.

In its Decision 2010/15/EU of 16 December 2009, the European Commission set out guidelines for the management of the Community system for the rapid exchange of information. As a guideline, Annexe 5 describes a method for risk assessment to be used by the authorities of the Member States. It is used to determine the risk level of a product that limits the safety and health of consumers. Depending on the risk profile, authorities decide whether a RAPEX notification is necessary or not.
The objective of this guideline is to provide a transparent and practicable method which can be used by the Member States' competent authorities to assess the risks of non-food consumer products. There are other guidelines for chemical, cosmetic, medical or pharmaceutical products. Despite this guideline, the risk assessment of products is a subjective process and should be well documented for reasons of transparency.

The Commission Implementing Decision (EU) 2019/417 of 8 November 2018 laying down guidelines for the management of the European Union Rapid Information System "RAPEX" established under Article 12 of Directive 2001/95/EC on general product safety and its notification system, which supersedes Decision 2010/15/EU of 16 December 2009, also contains the guidelines described here.

According to the "RAPEX" guideline, a risk is assessed based on the severity of a potential injury to the consumer and the likelihood that such injury will occur. According to this, the risk of a product can be determined as follows:

An example, which is also included in Annexe 5 of the guideline, briefly describes the application of risk assessment. As an example, a locksmith hammer was selected, which was reported in the RAPEX system under the number 125/06.

Procedure of the RAPEX risk assessment

The method is divided into six steps (see figure: Schematic procedure of risk assessment), which are based on four different tables: 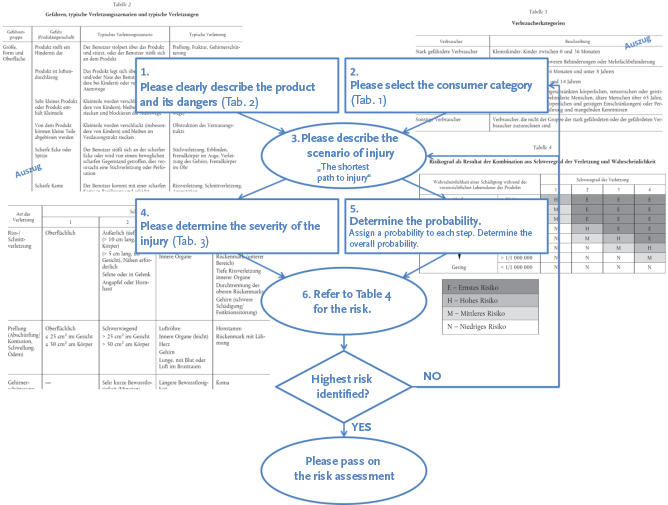 Step 1: Describe the product and its hazards clearly and precisely 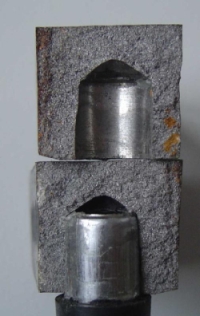 Please ensure that other persons can clearly identify the product. Product designation, brand name, model designation and country of origin are only a few criteria that you need for a complete product description. Table 2 serves as an orientation guide to identify the product risks. It identifies individual hazard groups, such as size, shape, surface or potential energy. From these product properties, you can deduce what possible risk might arise from the product. In addition typical injuries are shown.

In this case, a consumer uses a hammer to drive a nail into the wall. Due to the use of unsuitable material, the hammer head does not have the sufficient strength and breaks.

For the example "hammer", you can derive the following information from Table 2:

The skills and behaviour of the consumer when using a product can have a great impact on the risk rating. You can use the guideline to differentiate the possible consumers (see Table 1). It may be necessary to create injury scenarios with different consumers to reliably determine the highest possible product risk.

Please note that the following aspects influence the risk level:

Consumers who are not normally endangered may become vulnerable consumers in certain situations. This may be the case if the instructions or warnings on a product are written in a foreign language that the consumer does not understand. For the example it is assumed that according to Table 1 a "miscellaneous consumer" uses the hammer.

Describe the injury scenario in which the selected product risks cause one or more injuries to the selected consumers. The description should be clear and precise, but without too much detail.

A possible injury scenario is as follows: The breaking of the hammer head causes one of the pieces to be thrown into the eye of the consumer with such force that the latter is blinded. Table 2 provides concrete help for the description.

Step 4: Determine the severity of injury

Using Table 3 from the guideline, determine the severity of injury. It serves as an orientation and contains examples of the type and extent of the injuries in four degrees of severity. These in turn are based on the extent of the necessary medical care.

For the example "hammer" this means:
The injury falls under the category "eye injury, foreign body in eye: Permanent loss of sight (one eye)". Thus, according to Table 3, it is an injury with severity level 3.

To assess the risk, you need to estimate the occurrence probability of the scenario. To do this, you must consider all the individual actions leading to the occurrence of the injury. The guideline distinguishes between eight probability levels for the classification of the overall probability: from < 1/1,000,000 to > 50 % (see table 4, left side).

The example describes the path leading to the injury and the individual probabilities as follows:

Table 4: Risk rating as a result of the combination of severity level of injury and probability

After you have determined the severity level of injury and the probability of occurrence - if possible for several injury scenarios - you can deduce the risk level from Table 4. The table distinguishes four risk levels: serious, high, medium and low.
Using the values of the severity level of injury (here: 3) and the probability of occurrence (here: 1/6000), you can now determine the probability of damage during the expected lifetime of the product.
The probability is within the class "> 1/10,000", the severity level of the injury is "3". In total, this results in the risk level "H" or "high".
To complete your risk assessment, you should check the plausibility of the risk level. You can, for example, check whether you have used the best available information for your estimates and assumptions in your risk assessment. Feedback from other experts and colleagues may also be helpful.
In summary: The example described would not require a RAPEX notification. Nonetheless, it is a dangerous product, which must be handled with appropriate measures by the market surveillance authorities.

Guidelines for the management of the Community Rapid Information System "RAPEX"