The Focal Points (FOPs) act as a bridge between the European Agency for Safety and Health at Work (EU-OSHA) and the national occupational safety and health actors. The Federal Institute for Occupational Safety and Health (BAuA) was nominated as official representative by the Federal Ministry for Labour and Social Affairs (BMAS), where the FOP had been located before, and operates as the German Focal Point since 2015.

The Focal Points are official representatives of EU-OSHA in their respective countries nominated by the government. Each FOP manages its own tripartite network. Governmental safety and health representatives, representatives of employers' associations and employees' organisations as well as related relevant institutions are parts of the network mentioned above.

The central task of the Focal Points is to organise the transfer of knowledge between EU-OSHA and national safety and health representatives and institutions. Furthermore, they participate actively in planning and implementing the EU-OSHA campaigns on the national level. The Focal Point provides the national jury for the selection of national candidates for the Good Practice Award (GPA) and appoints national experts to support research, reports and other publications as well as to join working groups and seminars of the agency.

Tasks of the Focal Points

According to the founding regulation and the document "Current guidance on basic requirements 2003" passed by the administrative board, all member states are bound by contract to support the agency's initiatives by providing information and feedback from the EU member states as well as with their work in the national networks.

These contracts are specified in a so-called "mandatory" list, which is established annually by EU-OSHA and contains the obligatory tasks of the Focal Points. These tasks include, for example, the implementation of the European campaign on the national level, the nomination of national experts to attend various workshops and conferences introducing and/or discussing projects or new knowledge, as well as the support and review of different reports e.g. the European company survey ESENER-II.

Since 2013, the agency pursues a "portfolio approach" to the "mandatory list" including voluntary tasks/offers that the Focal Point network can choose and accomplish in order to use the resources of the network to an optimum and to attune to the differences between the member states. The aim of the “portfolio approach” is, to encourage the networks to engage in projects from which they expect advantages. Thereby, the agency can provide products and services which are tailored to the requirements of the individual member states.

Partners of the German Focal Point

The national network forms the Focal Point's core. Due to the variety of actors involved in the national occupational safety and health system in Germany, only representatives of the most important institutions and stakeholder groups are members of the network in order to disseminate the agency's information in their networks and, on the other hand, to transmit their own tools and knowledge to the agency:

The German federal states are represented by the State Office of Occupational Safety and Health, Consumer Protection and Health in Potsdam, Brandenburg (LAVG), which coordinates the information from the other states and regularly reports to the Commission for Safety and Health of the Federal States (LASI). Beside this the FOP is invited to report latest EU-OSHA news at meetings of the LASI.
www.lavg.brandenburg.de

The Confederation of German Employers' Associations (BDA) is a cross-sectoral association which acts as the voice of German employers. As Germany's central employers' association, the BDA organises the social and economic interests of the entire German business community.
www.arbeitgeber.de

The Joint German Occupational Safety and Health Strategy (GDA) is an initiative by the German government, the federal states and the accident insurance institutions. The alliance aims at modernising the German occupational safety and health system and to create incentives for companies to strengthen workplace safety and health.
www.gda-portal.de 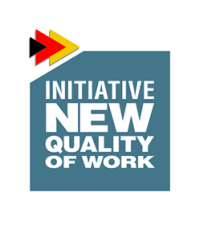 The New Quality of Work Initiative (INQA) is a shared platform of associations and organisations that was founded in 2002 by the BMAS and leading social partners. Today the initiative represents a nonpartisan alliance which includes Federal and State-level government, business associations, trade unions, the Federal Employment Agency, companies, social insurance providers and foundations. The initiative actively participates in debates on work satisfaction, sustainability and on making the world of work fit for the future.
www.inqa.de

EU-OSHA - European Agency for Safety and Health at Work

Find out more : EU-OSHA - European Agency for Safety and Health at Work …

European Agency for Safety and Health at Work (EU-OSHA)